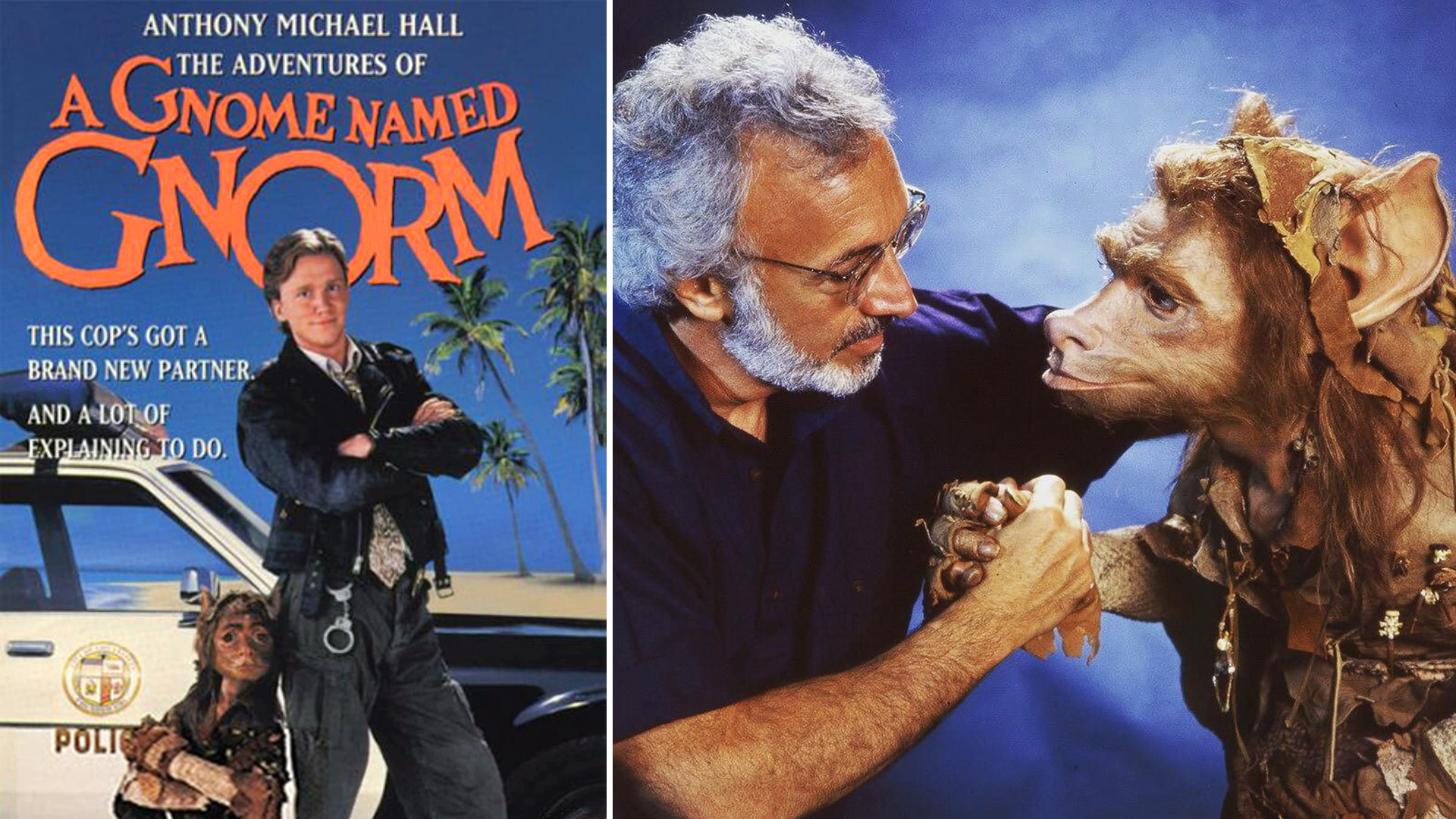 Having sold our first screenplay, Mystery Date, in a successful bidding skirmish, Terry and I were now the “Flavor of the Week” in Hollywood. We were flown to L.A. on Orion’s dime, and were now aiming for the stars. Or at least our next deal.

Our agents set up several meetings while we were there, selling us as the hot new commodity that could still be hired on the cheap: “Partners, so two-for-one… Former ad guys — like John Hughes — only briefly in town from Chicago… That spec sale of theirs? First time out of the gate. And they wrote it in just three weeks.”

We went for general meet-and-greets with nothing of our own to pitch. Producers and executives would open drawers and pull out projects that had stalled and needed a fresh take, “page-one rewrites,” or they’d rattle off their open writing assignments.

Terry and I sat across from the immaculate Bob Brassel at Warner Bros. — his suit cost more than both our cars — and we calmly dismissed opportunities. Nothing he proposed was a match for our newly inflated egos. I actually chided him: “Does the world really need another buddy-cop movie?”

We perched in Neal Moritz’s office while he pinwheeled around with a telephone headset, alternating between taking calls and tossing off comedy ideas: “Remote Control. It’s about a remote control, but it controls people!” Neal spat out a half-dozen half-baked high-concept loglines that would all go on to be movies or TV shows, but we just weren’t in sync with his sensibilities.

A few weeks after returning home, we got a call from our agent, Todd Harris. Would we be interested in a quick joke punch-up on a movie that was already in pre-production? It was going to be directed by Stan Winston.

Stan Winston! The special effects genius who brought the Terminator to life, the guy who had made Aliens inalienable. The producers would pay us 12 grand for two weeks of work, plus expenses. I would have happily paid them to do it. But, hey, carpe per diem.

“It’s a buddy-cop movie,” he explained. I made a note to apologize to Bob Brassel.

We took the unrestricted first-class airline tickets that were part of our deal and returned them for cash. Then we drove back to L.A. in the 1967 Dodge Coronet that Terry had just purchased. We didn’t tell our Mystery Date producer about the trip. It would be awkward since we had yet to make any real progress on the rewrite.

The movie was called Upworld. It was written by John Watson and Pen Densham, who were also producing. Our first night there, one our agents, Bruce Kaufman, joined us to meet everyone at the premiere of Pumpkinhead, which was screening at the Cinerama Dome. It was Stan Winston’s directing debut.

It was awful. Even the effects were nothing to write the Great Pumpkin about. I glanced soberly at Terry as we filed out.

“You’ll have to lie better than that.”

Bruce bustled over. “No, no, no. Nobody has to lie,” he insisted. “You just have to master the 100-percent non-committal near-compliment. Watch…” He turned to Terry to demonstrate:

“Wow. Just… wow. That was really something,” he beamed.

He turned back to me and nodded deliberately: “It’s all up there on the screen.”

He shook his finger playfully at Terry and chuckled: “Only youuu….”

The three of us managed to skirt by Stan, who was surrounded by supplicants on his big night. We simply waved.

Upworld was about a cop… and a gnome — the only witness to a high-profile murder in Central Park. (Technically, this was in the cop/not-a-cop genre and not strictly a buddy-cop movie.)

Stan Winston was building a million-dollar animatronic puppet for the gnome, specifically designed to be so skinny that no one could mistake it for a guy in a suit. He proudly showed us the character sketches and a clay maquette with fur stuck to it. It looked like a drowned rat.

Looking around at the iconic creature constructions that lined Stan’s workshop in Northridge — the Xenomorph queen from Aliens towering over Ripley’s Power Loader, a variety pack of Predators, and an ambulatory severed head from The Thing — it was hard to imagine how this gnome was going to measure up, let alone cost a million dollars.

They put us up near the beach, as requested — at the shoddy Holiday Inn in Santa Monica. By day seven, they asked if we could stay an extra week, for no extra pay. We asked if they could move us to a better hotel, while our agent negotiated another five grand.

Kailani, the radiant, Hawaiian-born office manager, arranged for us to move to the much nicer Hotel Shangri-La, right across from the beach, although our rooms didn’t face the water. Our first night there, Terry had sex on the rooftop with some professional dancer he met at the bar. I continued to work on gnome jokes.

I did write a running bit I was happy with. The gnome would continually correct everyone that the G in gnome was not silent. “It’s g-nome.” Also, his name wasn’t Norm, “It’s G-norm.” Eventually, that wound up as the title, A Gnome Named Gnorm. With a scheduled production start and scant options, Stan settled on Anthony Michael Hall for the lead. A few years earlier, we had failed to get hired to write for him on Saturday Night Live.

Stan Winston did teach us to write better action, to make sure we kept track of all the moving pieces like a director. We had written a car chase with a stolen hearse, and he patiently showed us how what we had described wouldn’t cut together in the editing.

We tried to teach Stan a little about comedy.

He wanted to change a line. When we first meet our hotshot cop, he breezes in and jauntily plucks a candy bar from the pocket of an uptight rival detective. “Oh, good. My Zagnut Bar,” he says with aplomb.

Stan didn’t know what a Zagnut Bar was. Apparently, they weren’t distributed on the West Coast.

“Let’s make it something else,” Stan declared. “A Snickers or something.”

I agreed. “Even with the K sound, Snickers is just not funny.”

“And yet it’s literally a word that means laughter,” Terry mused.

Stan ignored us. So, Terry called the Leaf Candy Company in Chicago and told them of our plight. They immediately shipped us two cases of Zagnut Bars, FedEx. We hid them all around the production office where Stan would find them: In Stan’s desk drawers, on his bookshelf, in his jacket pockets, in his script binder. He would chance upon them for days. He finally relented.

Sadly, Anthony Michael Hall did not understand aplomb. His line delivery was more manic than Murray-esque. Instead of tossing off the line as a confident smart aleck, he entered shouting like a drill sergeant. Then he inverted the words so the line didn’t land:

“Maybe Stan directed him to be unfunny on purpose,” I suggested.

“To get back at us? That would be funny. But, nah. It’s just as well our names won’t be on this.”

Our stint was over. We said our goodbyes. Terry and I had struck up a friendship with Kailani, the pretty, petite, Polynesian purveyor of better hotel rooms. We’d hung out at her apartment and met her adorable daughter. She told us about the writing group she belonged to and her screenwriting aspirations. Terry and I looked forward to getting back to Chicago, where not everyone was a screenwriter.

“Don’t forget these,” Kailani reminded. There was still a full case of candy in the office.

“I’ve never even heard of them. What is a Zagnut, anyway?” she asked.

“It’s a Midwest thing,” I explained. “They’re not really out here, I guess.”

Terry elaborated, “They’re like a Butterfinger, only with toasted coconut instead of chocolate.”

“That doesn’t sound very good,” she noted. She was smart, too.

“They’re not,” I admitted, and picked up the case.

Then, Terry and I left to drive back across the country. Everywhere we went, we handed them out. At every truck stop, toll booth, bar and restaurant, we played “Johnny Zagnut-Bar,” spreading toasted coconut-crusted goodness across the land.