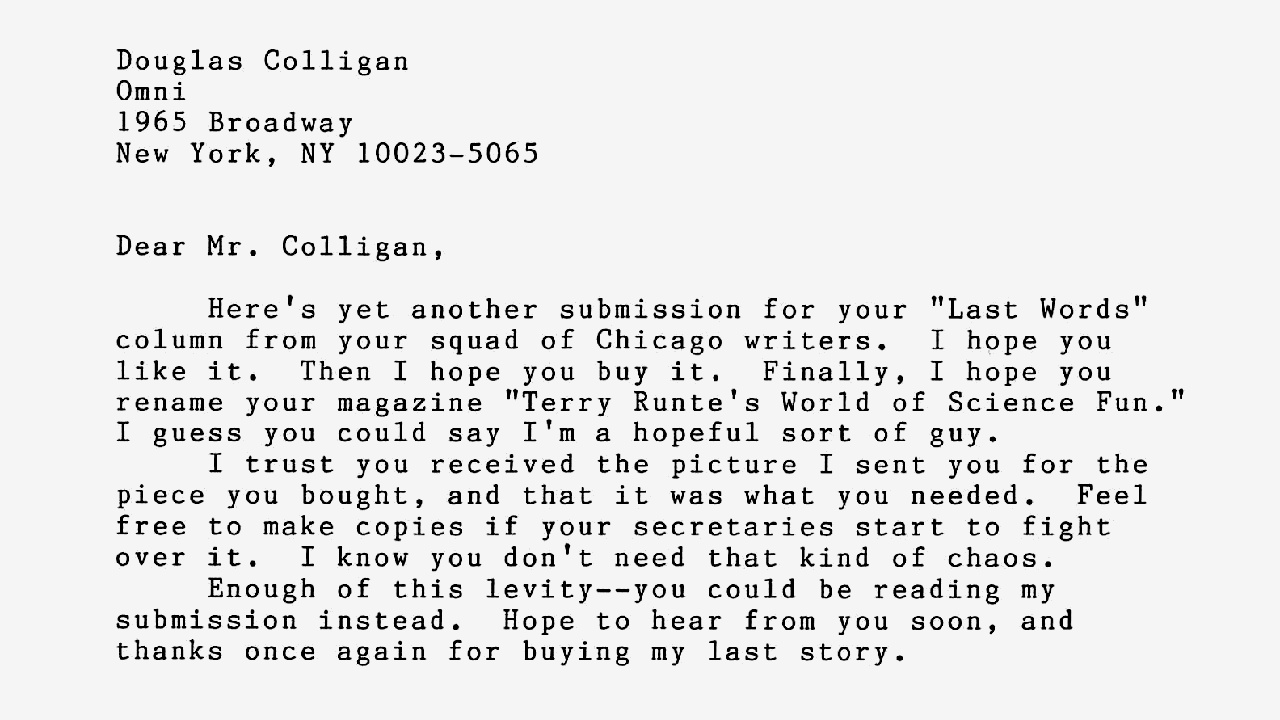 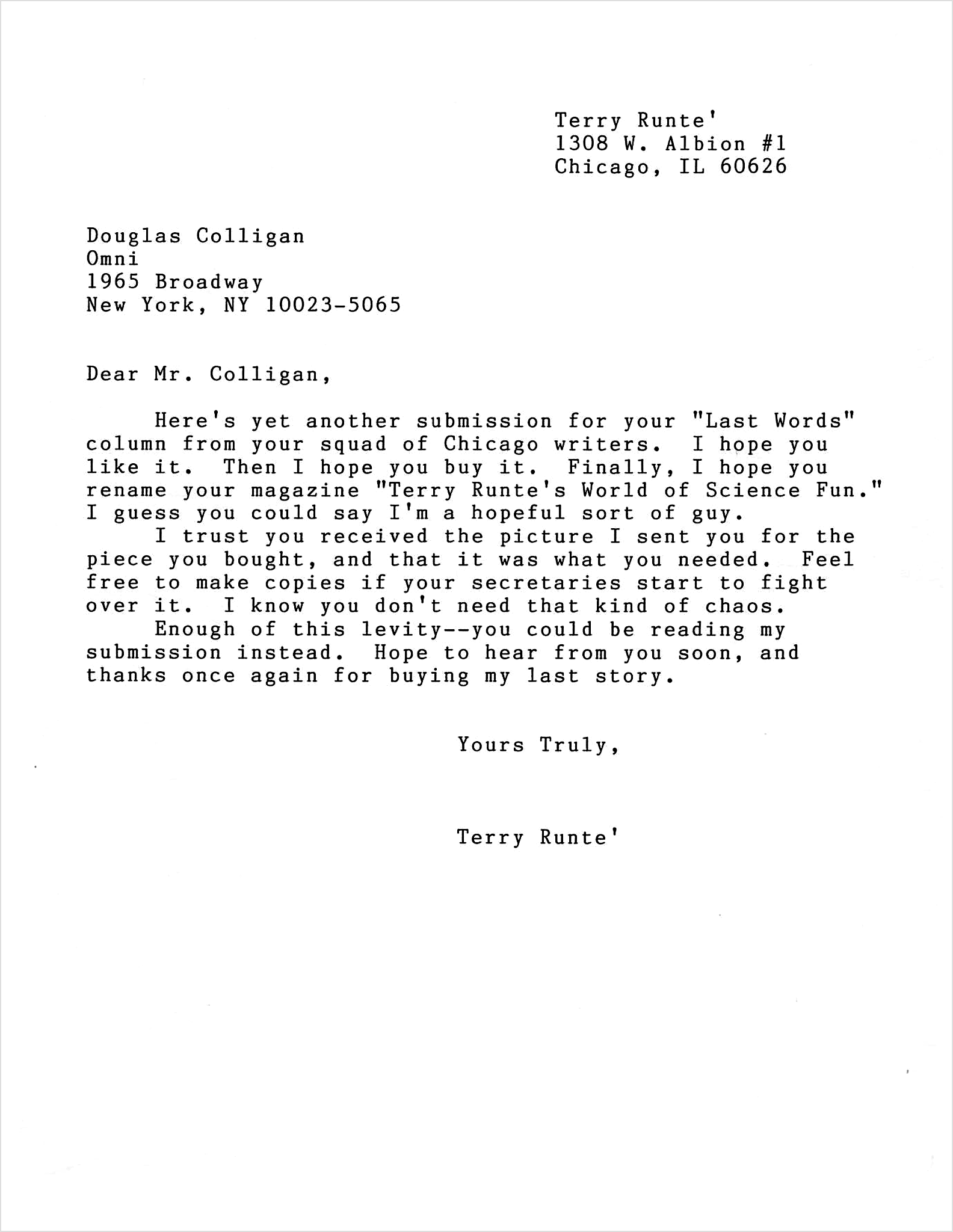 After making his first sale, Terry quickly submitted a second idea, resulting in a rare rejection — presumably because its over-the-top sexism was more National Lampoon than Omni. (This piece does reference a practical joke Terry actually played on his Milwaukee roommate Kevin: carefully removing all the little marshmallows from a fresh box of Lucky Charms and sealing it back up.)

The cover letter is pure Terry, cocky and charming:

Dear Mr. Colligan,
Here’s yet another submission for your ‘Last Words’ column from your squad of Chicago writers. I hope you like it. Then I hope you buy it. Finally, I hope you rename your magazine ‘Terry Runté’s World of Science Fun.” I guess you could say I’m a hopeful sort of guy…

Eerie Mysteries of Life Explained — But Not Excused

Attractive female hitchhikers. We’ve all seen them — lean and tan, with blonde California hair whisping and blowing just above their tattered cut-offs. But have you ever given a ride to one of them? (Strictly in the interest of saving them from getting picked up by some pervert, of course.) Or do they consistently appear on the other side of the road, only to vanish after you’ve cut off four lanes of traffic in a feverish U-turn?

Worse still, do girls swarm along the roadside, their sinewy legs beckoning as they hook their long, slender, voluptuous thumbs in the same direction you happen to be driving, with your girlfriend or wife or some other suddenly dispensable-looking burden filling the passenger seat?

Don’t let these taunting visions torture you. They are no more real than the married secretary at work who leers whorishly at you when delivering a memo, or any other reasonably attractive member of the opposite sex who gives you the time of day. They are all merely optical illusions, put there to drive you mad.

Yes, while our planet’s pointiest heads have been racking their presumably conical brains in preparation for mankind’s (or perhaps, in deference to women, “personkind’s” — or better still, to avoid offending inanimate objects, “thingkind’s”) total annihilation, we have fallen victim to a far more diabolical and humiliating fate: Aliens have been subjecting earthlings to an endless string of cruel, sophomoric practical jokes!

Think for just a moment of all the guys you know who are constantly surrounded by women. Is it just a fluke that they’re consistently taller than the average male — which is to say — us? Have you ever actually held a conversation with one of these guys, or did he act as though you weren’t really there all?? And don’t they seem sort of foreign, like ROBOTS??? Maybe it’s just a coincidence that the girls who throng around them seem a little shallow, a little less than human — like HOLOGRAMS!!!

Perhaps it’s time to consider the possibility — or rather, face the fact — that these beautiful, seemingly unattainable women, and these men who seem to be superior to us in every way, don’t really exist at all! They are part of an elaborate prank by superior hucksters — a gag of the Gods — intended to convince us we are sexually inferior.

It’s been said that the best practical jokes involve subtle, meticulous attention to detail, a lesson that has not been lost on these celestial jesters. With their incredible, advanced knowledge of science and gag technology, there must be a great temptation to go for the quick, easy laugh. A prank phone call on the Hotline from Moscow, for example, would be enough to trigger World War III and its subsequent hilarity. “Heylo, Ronny? Would you to be having Prince Albert in a can?” — and it would all be over.

Instead, our would-be fraternal brothers play far more sophisticated mind-games with us and are responsible for many of the frustrations we normally write off to “bad luck” or “coincidence.” With a simple spontaneous generation-beam, for example, they’ll turn a fresh carton of half & half into a teeming culture of rare and deadly microorganisms that would shame the entire Soviet biological warfare effort — over night. With their telepathic powers of hypnosis they cause all the really good-looking women to go for men who are actual physical freaks, like the Olympic diver Greg Louganis, instead of ideal mates like you and me.

Every Friday and Saturday night the aliens come to the Forest Hills area of New York, Rogers Park in Chicago, and East-side Milwaukee, where they rearrange all the cars parked on the road just before “bartime,” so you can’t find a parking space when you get home. They leave spaces just big enough to look like you might be able to squeeze in if you work at it for half an hour or so…

Have you ever bought a box of Lucky Charms only to find every single marshmallow star, moon, heart, and lucky four-leaf clover mysteriously absent? Another cheap shot from outer space. They have a highly selective disintegration beam that pinpoints the marshmallows and zaps them. They use it to fracture taco shells in their “shatter-proof” boxes, too.

Another common motif found in classic practical jokes is that of sexual humiliation, and our antagonists from the cosmos are certainly no slags in this department.

With a vast array of sly, dirty tricks these interplanetary deviates have managed to ruin the average earthling’s opportunity to have a normal sex life. Without their interference, you and I would be in the same league with Tom Selleck and Christie Brinkley and all those guys! WE ARE PERFECTLY NORMAL!

This systematic degradation should not be interpreted as hostility, but rather as a test — an intergalactic hazing, if you will — designed to initiate our unwitting world into a fraternity of planets throughout the universe who have proven themselves to be “good sports.”

No one knows how long this hazing will go on. Scientists, who discovered the phenomena at the Mount Polobar observatory, compared notes and data with those collected by an enormous, tortilla-shaped radio telescope in Mexico, and concluded: “Eventually the novelty will wear off and they’ll sort of feel sorry for us, and they’ll let us join, unless they’ve tricked us into starting a nuclear war or something.”

Terry Runté lives in Chicago, but spends his weekends backpacking and living off the land — in Milwaukee.