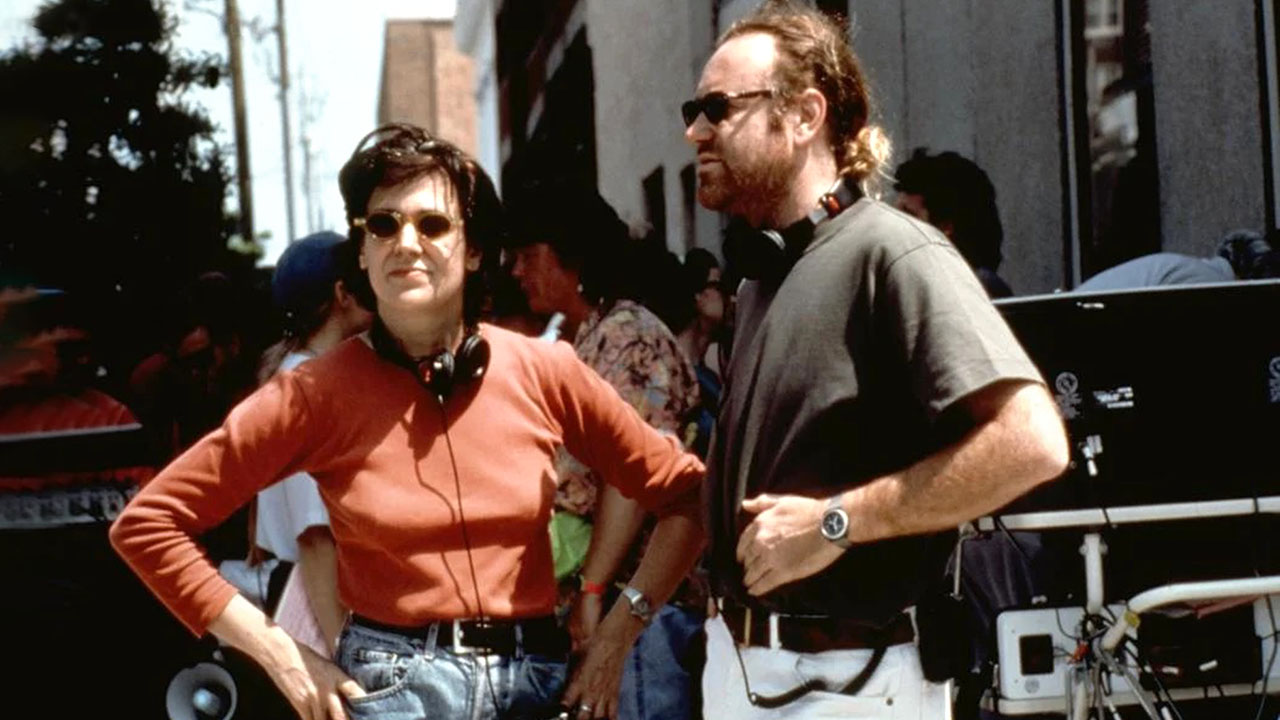 The leaves were dying, spiraling to the earth in deference to our career, which had sputtered with the release of Mystery Date in August. Late summer is typically a graveyard for movie releases, and we had shared the marquee with V.I. Warshawski and Double Impact.

“If Jean-Claude VanDamme can play twin brothers, why couldn’t they have let Ethan Hawke play both parts?” Terry groused.

The plot of Mystery Date relied heavily on our hero being continually mistaken for his evil older brother, but the two actors looked nothing alike. Two years later, Ethan Hawke would star in the plane crash survival movie Alive, with a half-dozen young actors who all looked exactly like him.

“Hey, at least we got a movie made. Our first script,” I said.

“Sure, and after two-and-a-half years of rewrites, paying our agent and lawyer, and then splitting the money, we made less than a Taco Bell manager,” Terry observed.

“You forgot the Writers Guild dues and taxes,” I noted.

That first script was like a first child, and we’d sacrificed a lot to get it made. It earned us a reputation for blowing deadlines because of our half-assed work on the rewrite of Ophelia, the body-swapping revenge-seeking cat movie that we continually neglected while we stubbornly rewrote and reworked Mystery Date for no money. Now, the movie had come out and made no money, and we were in limbo.

Todd Harris was upbeat as he shunted us off to a new junior agent, Bayard Maybank. Bayard was Todd’s former assistant, which didn’t help us, as he was the one who had to manage the calls from our pissed off Ophelia producers.

“I think you guys should come out here,” Bayard suggested. “We can set up a few meetings. You had that thing you were pitching, right?”

“Yeah,” replied Terry. “Yeah, yeah.” I looked at him quizzically. He shrugged.

“I think we can get you a meeting on Super Mario Bros.,” Bayard said.

“The video game?” said Terry. “How are they going to make a movie about that?”

“I think that would be your job,” our new agent replied dryly.

“Two hours of jumping plumbers. We can write that,” I assured Bayard.

We needed a gig. Terry and I were still writing freelance magazine articles but it wasn’t paying the bills, and the remnants of our Taco Bell manager salary was drying up. It didn’t help that Terry and I had both bought giant TVs and high-end LaserDisc players, and we both had a crack-like Criterion Collection habit.

We booked a flight.

Rocky Morton and Annabel Jankel were the husband-and-wife directing team behind the pop culture TV phenomenon, Max Headroom. They’d also made splashy music videos for Elvis Costello, Tom Tom Club, and Rush. I was a fan of their cooler-than-cool commercial work back when I was in advertising.

They’d directed one movie, the remake of D.O.A. with Dennis Quaid and Meg Ryan, which Terry and I both liked. It was loaded with swiveling camerawork, stylish lighting, and overtly cool production design. It had two black and white sequences. It was confident and kinetic, ending with a harrowing nail gun sequence.

They stood and beckoned us to their outdoor table. We were meeting for brunch. Rocky’s curly red hair was tied back in a pony tail that glistened in the sun. I envied his aggressively stylish stubble and arching eyebrows. Annabel was slim and short with short dark hair and an aura of art school seriousness. They both wore sunglasses.

They looked a bit like Terry and me if we were a married couple — and if my facial hair showed up in sunlight.

Rocky boomed in his jovial British accent, “There you are! The Mystery Daters.”

We smiled, not sure how to take that. We introduced ourselves.

“Working with Cathleen Summers,” Rocky added. “She produced our first movie, too.”

“Right. Summers-Quaid. Of course,” I nodded.

We told them how Cathleen’s Canadian currency-trading had let her come in a million dollars under budget on Mystery Date, which made her look good, but the movie look like it could have used another million dollars.

“She was unhappy about all the expensive night shoots,” continued Terry. “She was seriously thinking about making it ‘Mystery Lunch Date.’”

They laughed. Rocky told us how they were used to saving money with creative ingenuity, like using a plastic hair prosthetic and video processing instead of actual 3D computer graphics to make Max Headroom.

Then I gushed for 10 minutes about D.O.A. and Max Headroom and their music videos and the commercial work I admired when I was working at Burnett. There was barely butter left for the toast.

“So, Super Mario Bros.,” Terry interceded. “We understand you guys have a take.”

We nodded appreciatively, waiting for Rocky to continue.

“Sixty-five million years ago, a giant meteor struck the earth. Only, it didn’t wipe out the dinosaurs. It catapulted them into another dimension, a parallel earth where the dinosaurs continued to evolve.”

“Until they look more or less like us,” said Annabel. “Their world is a lot like ours.”

“But reptilian. Cold blooded. More aggressive,” Rocky went on. “The Mario brothers end up in this topsy-turvy new world and have to fight its evil leader. The ultimate apex predator.”

“And save a princess,” noted Annabel. “Or, more likely, she helps save them.”

I honestly thought this was genius.

Years later, when I started watching Doctor Who, I realized the idea might have been cribbed from an old episode featuring the Silurians. But at that moment, I could see a movie. I was completely in their thrall. I had been Morton-Jankeled.

“Have you played the video game?” asked Rocky.

I glanced at Terry. Which of us should lie first? I had played a lot of Donkey Kong in college.

“Fantastic!” Rocky beamed. “Brilliant. We don’t want anyone who’s too caught up in the game. We’re not worrying about any of that. This isn’t about a video game.”

“You can’t make a movie about a video game,” Annabel asserted.

“That’s why no one’s done it before now,” Rocky said. “It’s what tripped up the other directors.”

“You get trapped trying to make it about the game,” said Annabel.

“It’s about the brothers,” Terry agreed.

“Right,” I nodded. We knew how to write brothers. “It’s how the Mario brothers become the Super Mario Brothers,” I declared.

They talked about some of the story points they had worked out, and the few things they liked from the script the previous director was working from. We talked about what this parallel world would be like, evolving from dinosaurs.

“It’s like all the rudeness of New York multiplied by a hundred,” Terry said.

“Instead of hot dog stands, they serve raw meat,” I suggested.

We’d been back in Chicago a few days before we impatiently called Bayard.

“I don’t think you got it,” he said. “They liked you, but you didn’t really pitch a story. They needed to hear more details.”

“The plot,” Bayard explained patiently, as if we were writers.

“We could send them something,” Terry offered.

Terry and I hunkered down and roughed out three acts based on some of the story points Rocky and Annabel had discussed.

I nodded. “Yeah, I’m not sure about this talking book thing. I think they wanted to ditch all the fantasy stuff from the last draft.”

We tried to heighten the stakes, making King Koopa’s evil plan a threat to our world, as well. We added a Brooklyn nemesis for the brothers, a city engineer who has it in for them, and who turns out to be one of Koopa’s minions in disguise. We kept the talking plumbing manual.

I had bought a Macintosh SE/30 with our Mystery Date money, and I had an idea for a movie poster that I set about creating in SuperPaint, drawing with the blocky mouse to create a black and white bitmap image.

Terry was dubious. “That didn’t work on our Munsters pitch,” he noted.

We had made a 30-second video, playing “Here Comes the Bride” as we see the top of a wedding cake topped with bride and groom figurines. As the camera lowers, we see the chocolate frosting styled as hair, and a green-tinged cake looking like the top of Herman Munster’s brows. Then the Munsters theme song kicked in and we cut to a title card: “You’re invited… to the monster event of the century. The wedding of Marilyn Munster.” We had overnighted the tape and listened on the phone as they played it.

There was an uncomfortable silence and then, “Is that all?”

I realized our mistake. We should have shot video of Terry and me pitching the story after this intro. Except that we hadn’t really worked out the story, thinking our premise was enough. Marilyn Munster’s wedding was the perfect excuse to gather all of the monsters from the Universal catalog: The Wolf Man, The Mummy, The Creature from the Black Lagoon. And then, you know… hijinks.

For Super Mario Bros., we wrote seven pages of character details and story beats, with the bitmapped movie poster as the cover. It featured a tangle of old pipes receding into a pitch black tunnel, where glowing evil eyes stared out. Giant metallic letters announced “SUPER MARIO BROS.” with the tagline, “Unclogging the World this Summer.”

A week later, our agent called to congratulate us. 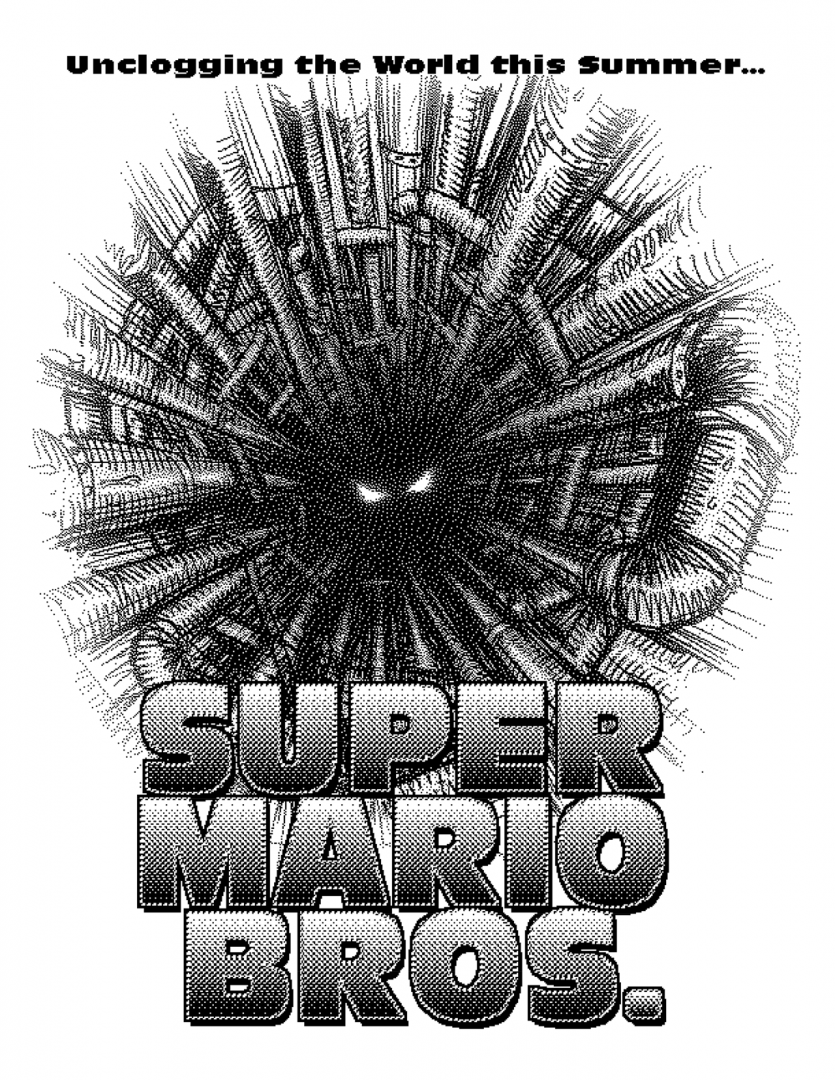